My sister, four years older than me, has not spoken to me in 12 years. (Of course it is a euphemism for surgically cutting me out of the fibre of her life.) She blames my love for women. She is of the opinion that it is infectious and consequently a threat to her young. I, of course, do not hold such an opinion.

At the outset of the excommunication, birthdays and holidays turned into thorny issues. The other days of the year I was free to disregard her. But on a momentous occasion? Do I congratulate? Commiserate? Wish her a merry whatever? Or show her the depth of my discontent with a measured silence. My mom, the endlessly hopeful peacemaker, as expected, insisted that I keep my side of the story spotless. To prevent blame from falling on me. But then blame had already been placed on me.

My approach turned out to be a knit one, slip one affair. It depended on my mood, how forgiving I felt.

Truth be told, after 12 years the mood is now unchanging. Absence does not make the heart grow fonder, in this case. One tends to adapt to your circumstances, your heart bonds with those you are surrounded by. My heart has adapted to a life without her. So much so, that I truthfully feel like an only child. (I do have a baby brother, but that is the subject for another day.)

With my birthday approaching this year, I understandably did not imagine receiving any well wishes, cards or calls from Ousus. When my mom phoned to say a letter addressed to me in my sister’s handwriting had just been delivered to her home, I had a few thoughts.

Utter dread in the pit of my stomach, was the first. You see, the last letter addressed to me in my sister’s handwriting and delivered to my mother’s house 12 years ago, was in fact a three page condemnation to hell written in all bold capitals. Based on the content of the letter it was safe for me to assume that she knew bold capitals amounted to screaming, and that three pages of it meant screaming with force. I was much younger and still thin-skinned at the time. I allowed it to hurt me so deeply that the mere mention of a letter addressed to me in my sister’s handwriting could 12 years later instantaneously fill me with dread.

My second thought was, letter bomb. Kapow, and all the evidence is gone.

My third thought was, anthrax. I would succumb to the poison, and possibly take a few innocent bystanders such as my mom and brother (guilty parties in my sister’s opinion) with, but at least there would be enough evidence left that could lead to her arrest.

My fourth thought was, a legal document of some sort. But then there was nothing that I needed to be restrained from. There was nothing she could sue me over. Or did she need to legally remove me as godmother to her son?

My last thought was, reconciliation? What if it was birthday wishes, or the tentative beginning of a dialogue? What the fuck would I in fact do then? Embrace her? Show her the door? Address her in bold capitals?

I decided to stop wondering and told my mom I would see her in the morning. I am sure my mother was tempted countless times in the dark of night to steam open the envelope, scour the contents for love, or for forgiveness and carefully glue everything back together again. Apart from the fact that my mom is a bit of a sleuth, she was excommunicated 12 years ago alongside me. Reconciliation between her two daughters, even if it was without her, would give her such joy.

In the morning I drove the required half an hour, casually picked up the letter and took it into the bathroom. It turns out, it was not condemnation, a letter bomb, anthrax, legal papers or reconciliation, but just a fucking estate agent with a handwriting similar to my sisters who wanted to wish me a fucking happy birthday. I tore it up.

I am much older now, and a little bit more thick-skinned. Yet I had hope.

When the Brits get it right, their comedy is infectious.

Young Ricardo needs to choose a gang. Farakhan wants to leave prison and the gangs behind. Leila wants to settle her father’s affairs and return to studying medicine in London. Gangster Gasant wants to avenge his little brother. A serial killer is looking for his next victim. Their lives will collide. END_OF_DOCUMENT_TOKEN_TO_BE_REPLACED

One can no longer say that a film like Faan se trein is good for “an Afrikaans  film”. There are simply too many incredible Afrikaans and South African films  available. Thus I have to judge Faan se  trein according to international (and South African) standards. END_OF_DOCUMENT_TOKEN_TO_BE_REPLACED END_OF_DOCUMENT_TOKEN_TO_BE_REPLACED

I’m starting my beerblog with a good one, possibly one of the best beers I’ve tasted to so far. The Brewdog Electric India – a blend of an Indian Pale Ale and a Belgian Sauvin – is going to be hard to beat. END_OF_DOCUMENT_TOKEN_TO_BE_REPLACED

I certainly taste enough beer to develop an opinion. END_OF_DOCUMENT_TOKEN_TO_BE_REPLACED

The wife was awarded a residency in Germany over the December holidays. Everyone shivered at the thought of winter in Europe, but we braved it. Yes, it was a little cold, but it had a beauty of its own. Plus, there were no hordes of silly tourists. Bonus. END_OF_DOCUMENT_TOKEN_TO_BE_REPLACED

I was in Sweden when I heard about Nelson Mandela’s death.

I felt disconnected. All around me there were images of him on TV and on front covers of papers and magazines, but I couldn’t understand what was being said or written. My friends and family were going to his house in Houghton and attending the Soccer City service.

A few days later I went to a small town in North East Germany.

I spent some time on YouTube watching Obama, Tutu and of course the now infamous memorial signer. My brother in law sent me a video clip of women singing late at night outside Madiba’s house.

To clear my head from a week of writing I wondered through the freezing streets of Schoppingen hoping for the fog to clear.  I hadn’t seen sun in days. I had visited all the touristy spots, bought all the exotic wine and pastries I could bear (which is a lot). I spotted a refrigerated truck selling fish in the town square.

The much dreaded ‘conversation’ started. The Germans don’t speak English. Fifty percent of them are rude on top of it. Luckily the fishmonger fell in the other 50%. Although we could not speak, the pointing and holding up of 5Euros was met with a smile. This is the broken conversation that followed.

If you cannot speak English in this town, you must be an art fart from the foundation. “Yes.”

Then some complicated German followed. I shook my head and lifted both shoulders. I had no clue.

The monger focused, took a deep breath and then slowly asked, “Where are you from?”

The vibrant colours and energy that suffused the air on a recent early summer’s evening madeBibliophilia the perfect spot for the launch of Réney Warrington‘s debut novel in English, October. This small independent bookshop, with its focus on books on photography and art and its in-store photographic exhibition, was where Afrikaans author and publishing consultant Izak de Vries came to talk about the latest publication from Protea Boekhuis. He was one of the first readers of the book, which is published in Afrikaans as Oktober. 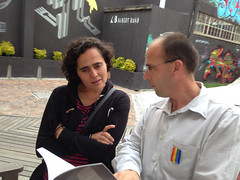 De Vries said Warrington touches on a number of topics that are seldom visited in the realm of the imagination that fiction permits.

After reading a short passage from the book, De Vries spoke about Warrington as a photographer and the photographs contained in the book. He praised her deft interweaving of the images and text as an integral part of the book.

“Every chapter starts with a black and white photo, and there are colour photos at the book’s centre,” said De Vries. “These represent the empty spaces of the narrator Jo Bester’s life.” He chatted to Warrington about the way her artistry as a photographer informs her writing. She said, “Often the thing you don’t photograph, what you leave out and what you don’t discuss is more powerful by its absence.” De Vries reflected on the toys in the images, which he described as almost more powerful than the children who played with them because they are truly missing from the narrator’s life.

Jo, a lesbian, has been forbidden by her homophobic family from seeing the niece and nephew with whom she has a vital and meaningful connection. Warrington writes from firsthand experience: “All I had left was the empty spaces where they had lived.” She had endured the grief by transforming the bitter blow life dealt her into fiction and images. She said October had touched a raw nerve, giving voice to the loss that many queer people experience when families reject them and deny them access to the children they have loved.

The book also touches on the theme of disability and resilience, and the beauty of what happens when people make real choices in the name of love.